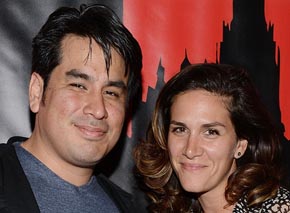 31 entrants competed for student BAFTAS this year from schools across Southern California, including AFI, USC, LMU, Chapman, CSUN, CalArts and Loyola Marymount in addition to UCLA.

"Each year, we are blown away by the quality of the films submitted, and this year was no exception,” said Neil Stiles, Chairman BAFTA Los Angeles. “The creativity and talent among this group of emerging filmmakers is outstanding, and we are proud to be recognizing their work at what has become an important annual event for BAFTA Los Angeles."

Seven finalists were selected by a jury of BAFTA Los Angeles members. Following a screening on June 20, Voting Members in attendance were asked to name their choices for the recipient of the 2012 BAFTA Los Angeles Student Film Award.

In addition to the Award, the winning filmmaker is also given a year’s opportunity to attend BAFTA Los Angeles events, seminars and screenings for a year to support their pursuits during this important early stage of their filmmaking career.

This is the only award that BAFTA Los Angeles gives that is chosen by the same voting members who vote for the Orange British Academy Film Awards, giving one student the distinct and prestigious appelation: BAFTA Los Angeles Award Winner.