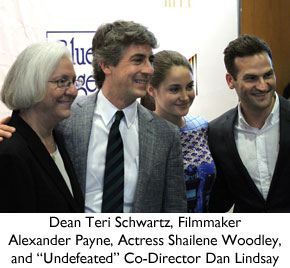 The Directors’ Showcase is a premier event showcasing ten films chosen to receive a coveted Spotlight Award. These films, which have emerged through several rounds of judging by TFT students, as well as a Blue Ribbon Jury of industry professionals, are among the most exciting works UCLA Film Festival has to offer.

The Panavision New Filmmaker Package Grant is awarded to a student cinematographer for outstanding work. Valued at approximately $60,000, the grant will provide a complete camera package to be used by the recipient for the production of their next project. The grant winner is selected by a vote of student peers who have reviewed all films submitted to UCLA Film Festival.