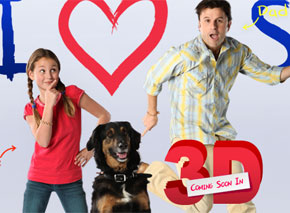 Alum Kevin Cooper '05 has directed his first movie, "I Heart Shakey." The film, which comes out June 29th, is billed as the first live-action, independent family comedy in 3-D.

Though Cooper studied in the Producers Program at TFT, he considers his background and training as a producer to have significantly helped him as a director.

Kevin Cooper on his film:

"I Heart Shakey" is a low budget feature film that we produced in Chicago with a target audience of 6-12 year old girls and their parents. Despite our limited funds, we focused on story, high production values, even shot in state-of-the-art 3D and collaborated with some of really cool actors. The film stars Steve Lemme (a comedian from the popular comedy troupe Broken Lizard who did "Super Troopers," "Beerfest"), 12-year-old phenom Rylie Behr, a rescue-dog named Ebony, Steve Guttenberg ("Police Academy" franchise), Beverly D’Angelo ("Entourage," "National Lampoon’s Vacation"), Alfonso Arau (who played the classic comic role “El Guapo” in "Three Amigos"), and a host of Chicago-based actors like Second City’s Andy St. Claire and Jefferson Award winner Janet Ulrich-Brooks.

The film was acquired by Phase 4 (North American rights) and Spotlight Pictures (internationally). It will be released in select theaters on June 29th and VOD (flipping the sequencing of release windows), and on DVD in August.