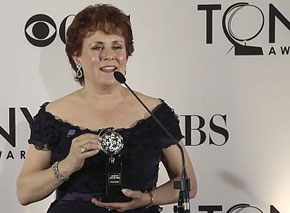 Classically trained opera and Broadway singer Judy Kaye '73 has won a 2012 Tony® award for her performance in the Featured Role of Estonia Dulworth in the hit musical "Nice Work if You Can Get It." Starring Matthew Broderick, the show is an original production built around the classic songs of George and Ira Gershwin.

The award is Kaye's second turn in the Tony® spotlight. She won in the same category in 1988 for her performance as Carlotta in "The Phantom of the Opera." She was also Tony®-nominated in 2002 for "Mamma Mia!" and in 2006 for "Souvenir."

In her televised acceptance speech, Kaye dedicated the award to the memory of her father, who had passed away a week earlier.

Kaye got her start when she was cast out of UCLA in 1968 to play Lucy in the Los Angeles company of "You’re a Good Man, Charlie Brown." She was the first Rizzo in the national tour of "Grease," originated the role of Emma Goldman in "Ragtime" and played the maid, Agnes, in "On the Twentieth Century." Kaye has appeared with the Santa Fe Opera, the New York City Opera, the New York Philharmonic and the London Symphony, singing Musetta in "La Boheme," Lucy in "The Beggar’s Opera" and Eurydice in "Orpheus in the Underworld." She returned to the New York City Opera for its 2005 production of "Candide."