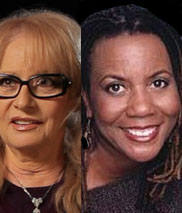 Director and screenwriter Penelope Spheeris, for Film, and Shirley Jo Finney, the award-winning international director/actor, for Theater, will be recipients of 2012 Distinguished Alumni Awards at TFT's Commencement ceremony.

Ron Meyer, Universal Studios President and COO, will be the 2012 Commencement Speaker.

TFT Dean Teri Schwartz will preside over the graduation celebration on June 15 from 4:00p.m. to 6:00p.m. at Dickson Court North on the UCLA campus.

Often referred to as a Rock ‘n Roll anthropologist, Spheeris is perhaps best known for directing the documentary trilogy "The Decline of Western Civilization," the feature film "Wayne's World" and its Grammy® nominated music video for Queen's "Bohemian Rhapsody." Her feature films also include The Beverly Hillbillies and The Little Rascals. For nearly a decade, she wrote for the hit sitcom Roseanne. Spheeris launched her career by producing short subjects for comedian Albert Brooks, many of them being highlights in the first season of Saturday Night Live. Majoring in film, Spheeris holds a BA ’69 and MFA ’73 from TFT.

Finney, MFA class of ’73, is an established television and film director and actor and garnered the International film award for Best Director for her short film "Remember Me." She is an alumnus of the American Film Institute Directors Workshop for Women and is a member of The Directors Guild of America, Screen Actors Guild and the Society of Stage Directors. She has been an Artist in Residence at Columbia College in Chicago, and a guest artist and lecturer at UCLA and USC.

“Our Distinguished Alumni Award recipients are groundbreaking, artists," says Dean Schwartz, "whose outstanding career accomplishments are a tribute to the very best that is TFT. Moreover, we are very honored to be able to use this important occasion for our students and TFT community to dedicate our commencement ceremony to our beloved founding Dean, Gil Cates, whose vision and extraordinary commitment to entertainment and performing arts education are without equal.”

Dean Schwartz continues, “We are very honored and delighted to have Ron Meyer as our Commencement Speaker this year. Ron is a leader of extraordinary skill and vision. His industry insights, experiences and values should be of enormous inspiration to our graduating students. He is one of the most respected and distinguished executives in the entertainment industry and we feel so fortunate that he will be with us on this very special day.”

Appointed President and COO of Universal Studios in 1995, Meyer is now the longest serving Studio Chief in Hollywood history. Prior to joining Universal, Meyer was President of CAA, which he co-founded in 1975. He presided over CAA as it became the preeminent organization it is today, representing many of the industry’s top talent and most influential people, and later expanding its range of services to include consulting with leading worldwide corporations. Meyer’s early career was as a television agent with William Morris. His career in entertainment began as a messenger at the Paul Kohner Agency in Los Angeles after serving in the U.S. Marine Corps.

UCLA Chancellor Gene Block will present Dr. Judith Reichman a commemorative tribute in honor of her late husband, Gil Cates, founding Dean of the UCLA School of Theater, Film and Television. Cates’ legacy to UCLA and the entertainment industry will be remembered throughout Commencement with the Chancellor providing special remarks about Cates’ illustrious career and his lasting influence on TFT/UCLA. As its inaugural dean, Cates transformed an already extraordinary program into a highly sought after world-class school for entertainment and performing arts with outstanding new faculty, innovative programs and unparalleled student and alumni success. While Dean and professor, Cates continued to have a robust connectivity to the entertainment industry through his leadership roles at the DGA, the Academy of Motion Picture Arts and Sciences and through his directing and producing. Gil Cates’ legacy at TFT is incomparable.

TFT commencement ceremony honors approximately 200 students from the departments of theater, film, television and digital media. The school will confer Bachelor of Arts, Master of Arts and Master of Fine Arts degrees. Doctoral scholars who have completed a PhD program will also be recognized at the event.