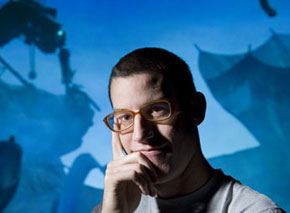 Posted on June 8th 2012 in Announcement

Oscar-nominated animation Shane Acker '04 has been called on direct "Deep," an animated underwater adventure set in a post-apocalyptic earth. Produced by Gregory R. Little, the film will use cutting edge technology to accomplish top-notch production at a fraction of the cost.

"Deep" takes place in a future where what's left of the human race following an apololyptic event moves into the ocean in order to survive. The story follows the crew of the nuclear submarine Norwood as they attempt to discover the secrets of the Wayfarers, a mysterious splinter group who goal is to wipe out humanity entirely.

Shane Acker came into the public eye when he was called on to expand his visionary short thesis film "9" into a feature for producer Tim Burton. The 11 minute short premiered at Sundance, and earned acker a host of awards, including an Academy Award Nomination

The technology that is being used in "Deeps" development draws on a video game developers software. More on This From Market Watch:

"The DEEP team has been working in collaboration with Valve, one of the world's most successful video game developers whose hit titles include the Half Life and Portal franchises. Valve has provided the "DEEP" team with new tools and technologies based on the developer's Source game engine. The tools enable flexible cinematography and editing, a simplified character animation process and economical lighting, sound and visual effects. Render time is cut to nearly nil, enabling rapid revisions to animation, which brings dramatic savings in time and money over traditional production.

Originally conceived as a graphic novel by Mitchell, "DEEP" will initially be produced as feature film; however, producing in a game engine means that the characters and environments in "DEEP" can easily translate to a game format. The team has already begun work on a playable level to be distributed via Steam, Valve's online game distribution network, and plans to create additional content for digital distribution and provide opportunities for user-created content in the "DEEP" universe.