Theater alum Sean Cameron-Young '04 stars in "Take me Out" 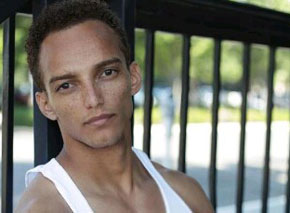 Rise Above Theatre Movement presents Richard Greenberg’s "Take me Out," a drama about a star player in a pro baseball team whose lifestyle preference causes a number of riffs among its team members, including a new star among its bunch. A Pulitzer prize winner and winner of 3 Tony Awards, "Take me Out" tells a story about a man’s “coming out” and how it's accepted among his peers in a postmodern society and the world of professional baseball.

Darren Lemming, a baseball player with the Empires, is one of the game’s golden boys. The bi-racial young man is so gifted at the sport that he has a firm belief in his own invincibility. He is also gay, and comes out publicly. He’s such a highly regarded player that he is able to shrug off the occasional homophobic insult. He’s one more different person on a highly diverse team. Then, one day, Shane Mungitt, a bigoted hillbilly with an unstoppable throwing arm, joins the team. Mungitt’s athletic abilities approach the supernatural. It becomes obvious that Mungitt’s bigotry and homophobia stem from ignorance rather than malice: Someone with a childhood as horrific as Mungitt’s would have to emerge a bit twisted. Does race enter into this at all? Of course. This story happens in America. Lemming decides to avenge himself against Mungitt’s slights. It’s a path sure to lead to blood and death. Can the players and the team survive?