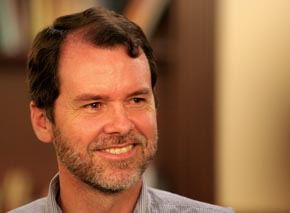 William McDonald, award-winning cinematographer and professor, has been appointed the new Chair of the Department of Film, Television and Digital Media (FTVDM) at UCLA School of Theater, Film and Television (TFT) and will assume his new position on July 1, 2012, announced today by Dean Teri Schwartz.

“I am delighted to announce today the appointment of our great colleague, Bill McDonald, as the new Chair for our distinguished FTVDM Department at TFT. While he has very tall shoes to fill in Barbara Boyle’s long and illustrious time as Chair, Bill’s vision, talent, experiences and collaborative spirit position him perfectly to take the reigns of this outstanding department and build upon the excellence of the department’s programs,” says Dean Schwartz. “Bill will expertly lead the department with exciting and forward thinking programs and initiatives that are a perfect fit for our new, innovative 21st century interdisciplinary vision. I could not be more proud or excited to work with Bill and congratulate him on this wonderful appointment. He will be a remarkable leader for our FTVDM Department and all of its students, faculty and staff.”

Appointed by Dean Schwartz, McDonald’s selection followed an election to the position by Department faculty. McDonald succeeds film producer and professor, Barbara Boyle, who, as Schwartz states “has successfully served as our FTVDM Chair for nine years with great distinction, outstanding leadership and groundbreaking initiatives for which we are so grateful to Barbara.”

“I am honored by this appointment and excited to work with Dean Schwartz, helping implement her vision. I look forward to working with TFT’s faculty, students and staff in my new position -- building on TFT’s superior legacy and striving toward all it is destined to be,” says Professor McDonald. “These are exciting and changing times in film, TV and digital media, and its landscape lay before us with limitless possibilities.”

During his tenure, McDonald has created student production and service awards that have enabled TFT students to complete their projects at a lower cost and given them access to new technologies not yet available publicly. He has accomplished this by working with numerous companies including JVC, Panavision, Datasat Digital Sound Systems, Technicolor International Digital, Deluxe Laboratories and FotoKem Industries.

Serving as Vice Chair for Production at TFT from 1998-2003, one of McDonald’s major accomplishments was leading the effort, with help from a strategic alliance with Apple Computer, to convert UCLA’s post-production facilities from analog to digital technology, building, at that time, the largest Final Cut Pro fiber-connected network in the country — only to be surpassed by CNN.

Passionately dedicated to his to students and teaching, McDonald’s commitments were recognized in 1997 when the UCLA Academic Senate Committee on Teaching honored him with the Luckman Distinguished Teaching Award for his success in the classroom, the first member of the film production faculty to receive this award.

McDonald received a Master of Fine Arts in Cinematography in 1986 from UCLA, the first cinematography degree awarded by the university. He then joined the faculty for three years as Head of the First Year Graduate Production Program. McDonald also served on the faculties of various film schools, including American University, Loyola Marymount University and USC’s School of Cinematic Arts Cinematography. In 1995, he returned to UCLA FTVDM as Visiting Assistant Professor, and was tenured in 1998 as Head of Cinematography.

The professional work of McDonald as cinematographer and producer include both documentary and dramatic films that have won numerous film festival awards. Among them are three independent documentaries produced with his wife Pamela Beere Briggs (UCLA BA ’80, MFA “90): Funny Ladies: A Portrait of Female Cartoonists, an award-winning series of profiles of leading female newspaper cartoonists; Women of Mystery: Three Writers Who Forever Changed Detective Fiction which examines the top female writers of contemporary crime fiction, Sara Paretsky, Sue Grafton and Marcia Muller; and Mysterious California: Four Authors, a rich visual journey through the distinctive California landscapes of four crime novels.