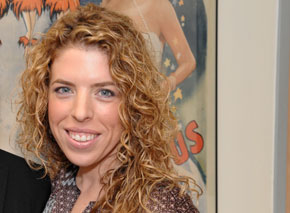 Posted on June 1st 2012 in Announcement

Tony nominated "Rock of Ages" alumna Kristin Hanggi ’98, who was TFT's Orientation Speaer in 2009, has directed "Surf the Musical," a brand new show in Vegas that has it's premiere on June 18th. The musical draws almost entirely on Beach Boys songs, from "Good Vibrations" and "Surfin' USA" to "The Warmth of the Sun" and "I Just Wasn't Made for These Times."

Hanggi was raised by a surf-loving family in Huntington Beach in the late 50's and early 60's, so the subject matter is very familiar to her.

She is focused on taking the most authentic feeling of returning to a simpler, more care-free time and seamlessly meshing it with modern production technology to provide the best possible experience for audiences.

""In a way, we had unearthed something that Brian [Wilson] had already written — from the characters, from the breadcrumbs he left behind," says "Surf" writer Jason Setterlund. Setterlund was so confident of the narrative strength of the Beach Boys' songs that an early draft of "Surf" was entirely sung-through. Hanggi argued for some dialogue, but even now there's never more than a page between the show's 20 or so musical numbers. It was Setterlund who came up with the musical's title.

"When we called it 'Surf,'" he says, "it's less about the sport of surfing than about the ocean itself, about surf as a force of nature, as a metaphor for the things we have to negotiate in life." "Surf is everything," adds producer J Burton Gold, who saw the Beach Boys in concert four years ago and decided at intermission to make it a musical. "It's the pulse of the tides pulling you in and taking you out. It encompasses the music of the '60s, when times were just a little bit easier."

But don't think the whole show is nostalgia overload, Hanggi says. This being 2012 — and Las Vegas — there are some flashy modern elements. Most obvious will be the five LCD screens that provide the show's backdrop — images of waves, sunsets, coral reefs, '60s-era advertisements. They enable Hanggi to show surfing on a stage, one of her prouder achievements. "Going into Vegas, where people are used to spectacle being so big, it almost allows us to be adventurous," Hanggi says. But the focus is on the songs — which, in a lucky accident, are in the public eye as the Beach Boys embark on their well-publicized 50th anniversary reunion tour. It's the strength of these songs — "the genius of Wilson," as Gold puts it — that motivates "Surf's" creative team.

When Hanggi still wasn't sure if she was going to do the project, she read Wilson's liner notes on "The Smile Sessions," a box set of the band's most mythologized, famously delayed album. "Many years ago I said that, 'Music is God's voice,'" Wilson wrote. "I've often felt that I was on a musical mission, to spread the gospel of love through records." "I read that and I was like, I'm doing this show," Hanggi says. "That's what I want to do too. I want to spread the gospel of love."