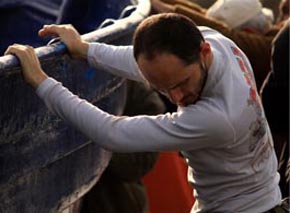 Richard Perkin's “Contra el Mar,” a Spotlight-winning short that took the top prize at the 2012 LACMA Muse Young Directors Night event over the March 11 weekend, will screen in June at the Los Angeles Film festival. TFT alumnus Topher Osborn MFA ’08 (“An African Election”) was the film’s director of photography.

At a LACMA Q&A in March, Parkin talked about the importance of tight narrative screenwriting, and that he had to resist “falling victim to [the tendancy of] a new piece of story information means a new scene.”

Despite his wife’s disapproval, Hector bides his time as a deep-sea diver to provide for his family and to save for his own fishing boat. But after an accident at sea, Hector is forced to confront the deadly nature of his profession and the responsibilities to his family. 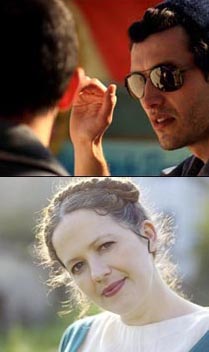 The short science fiction parable "Laura Keller - NB," the new short film by alumna Perkins, is also screening in the LAFF Shorts Competition. In a near-future society in which global population is at an extreme high, federal fertility lotteries determine who can and can’t reproduce. When one woman learns that she will be permanently sterilized, her faith in the system is shaken.

The film debuted on "Futurtestates," a website created by the Independent Television Service (ITVS), who asked both renowned and emerging filmmakers to take the current state of affairs in the United States and extrapolate them into stories of the nation in the not-so-distant future.