For Commencement 2012, The inspirational story of Hunter Bird 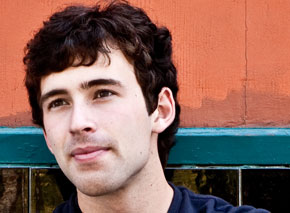 Hunter Bird '12 had always excelled in school, and everyone who knew him expected great things for him in the future. When he was diagnosed with a rare form of cancer directly following his high school graduation, he didn't let that get in his way. Juggling a large class load, extracurricular activities, chemotherapy, starting his own theater company, and hospital visits, Bird didn't exactly keep his promise to his doctor that he would do "as little as possible."

Fortunately, this story of bravery and dedication has a happy ending. Even with his extremely full schedule and commendable work ethic, he managed to come out unscathed, and will walk at graduation cancer-free. Above all else, Bird cited the constant and unwavering support that he received from his family as the main thing that helped him survive this traumatic ordeal.

Read more below from The UCLA Newsroom:

"The musical theater and directing major from Palos Verdes, who was recently chosen to receive a Distinguished Senior Award from the UCLA Alumni Association, will walk with his classmates at the UCLA School of Theater, Film and Television commencement ceremony on June 15 with a degree he completed at the end of the winter quarter.

He graduated a little early — minus a couple of minors he decided to forgo at the last minute — because he was tapped to be assistant director for an acclaimed production of "Clybourne Park" at the Mark Taper Forum in Los Angeles.

When the "Clybourne" run ended in late February, Bird flew to New York City to direct the debut of a play written by a close friend, Kate Douglas, at New York University's Shop Theatre. Then he returned to Los Angeles to be assistant director for the Taper's production of a new play, "Los Otros," which is being directed by Graciela Daniele and runs through July 1.

A lot for just a couple of months. But everyone who knows Bird thinks that's typical — and just the beginning. "I look forward to our paths crossing in the future," Pam MacKinnon, the director of "Clybourne," said of Bird. "He's a very energetic, very open, eager, smart, clearly articulate young director."