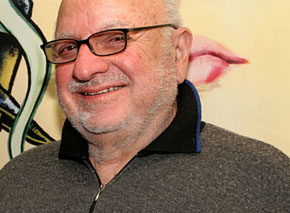 TFT screenwriting professor Dee Caruso died Sunday, May 27, 2012 of pneumonia at his home in Brentwood, California. He was 83. Caruso started his career writing for nightclub comedians such as Don Adams and Martin & Rossi. He and his writing partner, Gerald Gardner, went on to write shows for comedians Jack Benny, Jerry Lewis, Don Adams, Don Rickles, Debbie Reynolds, Robin Williams, Bill Cosby and The Smothers Brothers. Caruso and Gardner were the head writers for the original TV series “Get Smart,” created by Mel Brooks and Buck Henry. They also penned an unusual game show, “Screen Test,” which starred their “Get Smart” leading man, Don Adams.

The pair created the TV series “The Monkees” and were the show’s head-writers and producers. They wrote for “The Red Skelton Hour” and co-produced and co-wrote the teleplay for a sitcom pilot called “The Pickle Brothers.” The story was typical of any 1930's Marx Brothers film and starred the comedy group “The Uncalled for Three.”

Caruso and Gardner wrote feature films, as well, including “The World's Greatest Athlete,” for Disney, and “Which Way To The Front” and “Doin' Time,” for Warner Brothers. Their “Gilligan's Island” episode with Phil Silvers and two of their “Get Smart” episodes were picked as among the top fifty sitcoms. They also teamed up for several TV movies, including “How to Break Up a Happy Divorce,” which they wrote and produced, starring Barbara Eden, and “Break Up,” with Bernadette Peters and Bruce Davison.

Caruso was nominated for a prime time Emmy for “That Was The Week That Was” with David Frost. For ten years he co-taught a class with his wife, Sandra, called 'What's Funny, What's Not,” at UCLA Extension. After that he served for20 years as a Professor of Screenwriting at TFT. Caruso is survived by his wife of 47 years, Sandra Caruso, and his four-legged friends, Pinochle and Shadow.