Kurdish Drama based on Student-Produced "Bekas" sells at Cannes 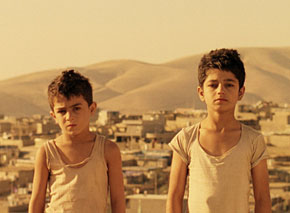 The feature version of Kurdish drama "Bekas," originally a short film produced by TFT grad student Glenn Lund, was sold for international distribution at this year's Cannes Film Festival! The Iraqi-Finnish-Swedish co-production was shot last Fall and will be released this November. Lund, who graduates the Producers Program this June plans to start his own Scandinavian-American production company later this year.

The short film, directed by Karzan Kader, is set in the early 1990′s in Saddam Hussein’s Iraq and tells the story of two homeless Kurdish brothers who see "Superman" in the town’s first movie theatre and decide they are going to live with him in the US. It’s a long, dangerous road in the hands of ruthless human smugglers.

The film won the silver medal in the Foreign Student Film category at the Student Academy Awards. Lund is also a finalist at the UCLA School of Theater, Film, and Television Film Festival's Producer's Marketplace on June 12th with another film, "Mister Kool."

You can view some more information about the feature, including the newly released trailer, by following this link: http://www.trustnordisk.com/film/2012-bekas

From The Hollywood Reporter:

"TrustNordisk has locked up multiple territories for the Kurdish drama Bekas, the debut feature from director Karzan Kader, inking sales with Arrow Films for the U.K., Rialto Distribution in Australian/New Zealand and Cineart for Benelux after screening the film’s trailer to buyers in Cannes.