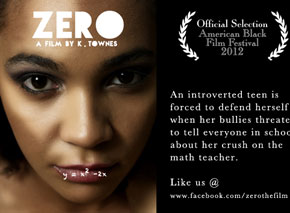 The film will screen before a festival audience and compete against 4 other films for a grand prize of $20,000. In addition, the films in competition will be considered for broadcast on one of HBO’s programming services.

"Zero" is the story of an introverted teen who's forced to defend herself when bullies threaten to spill the beans about her crush on the math teacher.