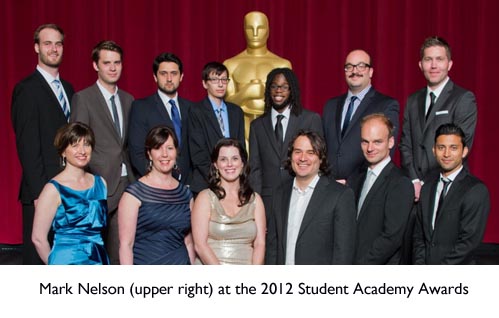 TFT student Mark Nelson has won the Silver Medal for animation at the 2012 Student Academy Awards for his Spotlight Award-winning CG romp "The Jockstrap Raiders." Thirty-five students from 20 U.S. colleges and universities were selected as finalists in the Academy of Motion Picture Arts and Sciences' Annual Student Academy Awards.

"The Jockstrap Raiders," a 19 minute CG animated short that took 5 years to complete, takes place during World War I in Leeds, England where a group of underdog misfits are excluded from the war due to various abnormalities. Through a hilarious turn of events, the group must learn to become a team and overcome their deficiencies in order to save Britain.

US students competed in one of three regional competitions. Each region is permitted to send to the Academy up to three finalists in each of the four categories. The Academy established the Student Academy Awards in 1972 to support and encourage excellence in film-making at the collegiate level. Past Student Academy Award winners have gone on to receive 46 Oscar nominations and have won or shared eight awards.

Winners will be brought to Los Angeles to join the international student winners in the Foreign Film category for a week of industry activities. The festivities will culminate in the awards ceremony on Saturday, June 9, at 6 p.m. at the Academy’s Samuel Goldwyn Theater in Beverly Hills, where the placements in each category will be announced.