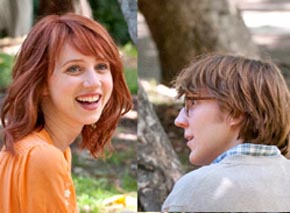 "Call it a [Charlie] Kaufmanesque hipster Pygmalion: a latter day JD Salinger (Dano) suffers from writer's block and love life woes, until he starts to write a character so adorable that she manifests herself in real life. When Dano finds the girl sitting in the flesh on his couch, he's confronted with his desire to love her and the knowledge that she's his own creation. He can rewrite her. And everyone can see her. He has complete control over her. What will he do with this power?