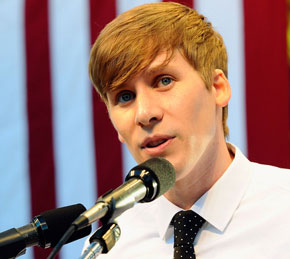 Last month, Dustin Lance Black '96 wrote a highly negative piece for The Hollywood Reporter condemning both Obama and Romney for their lack of support for same-sex marriage. With Obama's recent announcement that he fully supports same-sex marriage, however, Black has completely reversed his position, throwing his full support behind the president. His support is going beyond just speaking out in favor of Obama, with a fundraiser already scheduled for June 6th geared toward getting the LGBT community to take an active financial role in the president's campaign in return for his support. More from The Wrap:

"“I am moving from a position of little enthusiasm to a position of strong support, and that means you will see me contributing financially and repeating my efforts of 2008 by knocking on doors in states where he wants me to knock on doors,” Black said. “When you ask for something big and you get it, you have to show your gratitude.”

“Romney being elected would be devastating for the gay community, I’m not politically naive, but I also think we have to be united in our resolve to get full equality,” Black said. “The greatest power we have is our vote, so last April I considered reserving my vote. In my heart, I never wanted to do that. I was just hoping he would do the right thing.”

The screenwriter added that the president’s statement, coming as it did on the heels of a gay marriage ban in North Carolina, will send a powerful statement to lesbian, gay, bisexual and transgender teenagers. “I think it was life saving,” Black said. “The day before, North Carolina sent out a negative message to young LGBT teens that the government does not value you, and it does not respect you, so I think it did so much to salvage their wounded self-esteem.