Several TFT films are at the festival, which runs through May 20th 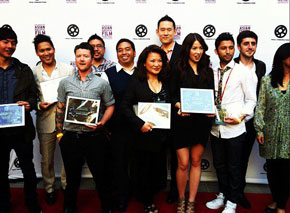 Update: "Sunset Stories" won the Grand Jury Prize for Best Ensemble Acting! Congratulations to all the filmmakers on a job well done!

TFT alumni Akira Boch, Ernesto Foronda and Silas Howard, and current student Masami Kawai, are taking their films to the Los Angeles Asian Pacific Film Festival this month! The Centerpiece Presentation of the festival will be the hometown screening and West Coast premiere of "Sunset Stories," directed by Foronda and Howard. The film is being producer by "Fast Five" Alum Justin Lin as the first ever film to be produced as his company YouOffendMeYouOffendMyFamily's ffirst acquisition.

Read more below from The Daily Bruin:

"Two talented but directionless indie rock bandmates belt out heartfelt lyrics as they struggle to bring their music out of the garage. They both whip their long dark hair around and smile as they allow their tunes to drown out all other worries, at least for the time being.

This scene is from UCLA alumnus Akira Boch’s film “The Crumbles,” which will be one of the many Asian American-centered films screened at this year’s Los Angeles Asian Pacific Film Festival.

According to Masami Kawai, a directing graduate student at the UCLA School of Theater, Film and Television, the talents of Asian American actors, producers and directors are often overlooked in mainstream Hollywood cinema.B y showcasing the best of Asian Pacific American cinema in the United States, the Los Angeles Asian Pacific Film Festival serves as a launching pad for the directing talents of two UCLA alumni and a current graduate student. Through the inclusion of the latest works by both well-known and emerging filmmakers, the 28th annual festival’s aim is to provide the support and commitment to development that Asian Americans both behind and in front of the camera often lack.

“The film festival gives filmmakers that are Asian American, or actors that appear in these films, the opportunity to be seen and heard, whereas in other film festivals they have their own agenda that they are trying to fulfill and don’t always take into consideration ethnic background or issues of representation,” said Boch, who received his Master of Fine Arts in directing from UCLA’s graduate film program.