For the Love of Movies

In May 2012, two classes of students from West Adams Preparatory High School traveled to TFT to participate in a full day of educational events, from film screenings to demonstrations of the magic of motion picture cinematography. The celebration, “For the Love of Movies,” organized by members of the student organization Elevate, was the latest in a series of joint educational programs created by the School in collaboration with the Telluride Film Festival.

The first of these collaborative events was the inaugural FilmLAB program that brought 10 of TFT’s top graduate student, known as FilmLAB fellows, to the 38th Telluride Festival in 2011, for a exhilarating weekend of screenings and seminars and close encounters with their moviemaking heroes.

“Telluride and TFT share common values, a strong belief in the power of cinematic storytelling to make a profound difference in the world,” said TFT Dean Teri Schwartz, in her opening remarks at the event.

The West Adams students were treated to a screening of the Oscar-winning Telluride hit “Slumdog Millionaire,” a tour of the School’s world class facilities conducted by TFT’s Production Services and Facilities Coordinator Rand Soares and they got an eye-opening look at the power of motion picture imagery to heighten reality in a hands-on demonstration offered by Professor Bill MacDonald, TFT’s Area Head for Cinematography.

In addition to the rapt students, participants included such distinguished guests as Julie Huntziger, co-director of the Telluride Film Festival, Veronica Melvin, President and Chief Executive Officer of the non-profit LA’s Promise, which was instrumental in the creation of West Adams Prep, and legendary film producer Frank Marshall (“Raiders of the Lost Arc,” “War Horse”).

It was Marshall, Schwartz explained, whose generosity as a donor, and his connections with all the parties involved, made the visionary collaboration with Telluride possible. A TFT alumnus and a long-time supporter of educational programs at Telluride, Marshal is a member of both TFT’s Executive Board and the board of LA’s Promise. As such he has been closely involved with West Adams Prep since it’s founding in 2007.

“These wonderful new relationships are truly all due to Frank’s vision,” said Dean Schwartz.

The underlying message of wide-open opportunity at TFT was brought home when Samantha Sheppard and Mila Zuo, co-chairs of the student group Elevate, introduced current third-year directing student Julio Ramos, who screened his multi-award winning short film “Una Carrerita, Doctor!” Ramos told them about fulfilling a dream of makling make meaningful movies in his native Peru. The inspirational impact of his example was what "For the Love of Movies" was all about. 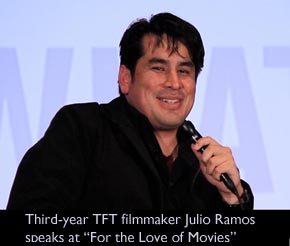 ABOUT THE TELLURIDE FILM FESTIVAL

The prestigious Telluride Film Festival ranks among the world’s best film festivals and is an annual gathering for film industry insiders, cinema enthusiasts, filmmakers and critics. TFF is considered a major launching ground for the fall season’s most talked-about films. Co-founded in 1974 by Tom Luddy, James Card, and Bill and Stella Pence, Telluride Film Festival, presented in the beautiful mountain town of Telluride, Colorado, is a four-day international educational event celebrating the art of film. Telluride Film Festival’s long-standing commitment is to join filmmakers and film connoisseurs together to experience great cinema. The exciting schedule, kept secret until Opening Day, consists of over two dozen filmmakers presenting their newest works, special Guest Director programs, three major Tributes to guest artists, special events and remarkable treasures from the past.

West Adams Preparatory High School made history as the city’s first Partner School, opening its doors to 2,200 students in September 2007. MLA Partner Schools and LAUSD came together in an unprecedented collaboration to provide an entire South Los Angeles neighborhood with the highest quality education. West Adams currently serves close to 2,700 students and their families.

In a setting similar to a university, students at West Adams Prep enroll in one of six thematic small schools, each with its own academic focus: the School of Business & Enterprise, the School of Invention, Design, Engineering & Architecture, the School of Media, Film & Art, the School of Science & Technology, Students enjoy personalized instruction and stronger relationships with their teachers and cohort as they study within a supportive academic community. Each school offers innovative instruction, is academically rigorous, and provides unique educational opportunities through partnerships with leading community organizations and corporate leaders.

Many of MLA’s Hallmark Programs were piloted at West Adams with huge success. Some of these programs include the Go For College Initiative, 7 to 7, Summer Bridge and Power Lunches. West Adams also saw a 31 point increase in their Academic Performance Index (API) last year, moving from 523 in 2007-08 to 554 in 2008-09. Although this is just the beginning of the journey toward academic excellence at West Adams Prep, we recognize the significance of this feat in light of the economic crisis that continues to impact our daily work. We hope that you will join us in celebrating our achievements as we begin to set higher academic targets for the coming years.

LA’s Promise, a nonprofit organization, is working to radically shift the education, health and social outcomes for thousands of youth in one South Los Angeles community. This will accomplish a "neighborhood turnaround" in an area we call LA's Promise Neighborhood.

LA's Promise Neighborhood is an enrollment zone that includes two large South LA high schools and one middle school operated by LA’s Promise on a first-of-its- kind performance contract with LAUSD. Within this zone, LA’s Promise transforms chronically failing public schools, opens new schools and remakes schools into community hubs that offer comprehensive support services for students and families. By doing this, LA’s Promise will prepare every child in LA’s Promise Neighborhood to be college-ready, healthy and successful in life. LA’s Promise also screens and manages more than 50 partners who support these school communities by providing over 200 wraparound services.

TFT Dean Teri Schwartz has pledged $4,000 annually from the school’s coffers to support Elevate, a new student-led organization that promotes diversity among students and faculty members.

The group, which will hold its first meeting on Monday, May 23, aims to give “voice and visibility to the diverse contributions of multicultural filmmakers, theater practitioners and scholars” by sponsoring film screenings, lectures, social gatherings and alumni networking opportunities, according to its mission statement.

Open to all TFT students, Elevate will also offer members grants of up to $275 a year for research or screenings of work that advances the organization’s mission. Membership is free.

“Although TFT has a long history of admitting students and employing faculty members from all racial and ethnic backgrounds, we are always looking for ways to further our goal of cultivating diversity,” Schwartz says. “We hope that Elevate will serve as a template for the kind of diversity we want to encourage not only at UCLA but also throughout the film and theater industries.”