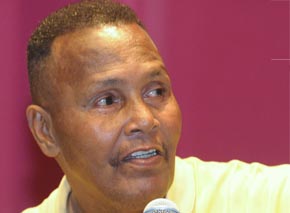 TFT alumnus Jamaa Fanaka '73, MFA '79, the writer-director of the hit "Penitentiary" series who was a key figure of the LA Rebellion movement at the School in the 1970s, passed away on Sunday, April 6, in his South Los Angeles apartment. He was 69.

According to the "Los Angeles Times, " Fanaka "later made headlines with his legal battles alleging widespread discrimination against women and ethnic minorities in the film and television industry:"

"The Mississippi-born Fanaka was still enrolled in the UCLA film school when he wrote, produced and directed his first three feature films, financed with competitive academic grants and funds from his parents: "Welcome Home, Brother Charles" (1975), "Emma Mae" (1976) and "Penitentiary," which was both a critical and box-office success.

In his review of "Penitentiary," The Times' Kevin Thomas wrote that Fanaka "has taken one of the movies' classic myths, the wrongly imprisoned man who fights for his freedom with boxing gloves, and made it a fresh and exciting experience."

"What 'Penitentiary' says," Fanaka told The Times in 1980, "is that no matter what kind of situation one is confronted with, within each of us is the wherewithal to triumph."

Horak, who was one of the curators of the film series, said Fanaka's films are "extremely interesting because they navigate a path between basically Hollywood-style filmmaking and independent filmmaking — very low budget, but at the same time very close to the community. He used amateur actors in secondary roles and shot in the community, and the stories came out of that community."

In a tribute to Fanaka published on the UCLA Film & Television Archive website, Horak writes:

"I like to think of Jamaa as the trickster of the L.A. Rebellion group. He came from a middle class family, but liked to affect a streetwise, homie attitude, throwing out double entendres and clever quips, like some rapper on the run. Jamaa loved to live and think large, even when economic circumstances had reduced him to modest means. Yes, he loved to be the center of attention, yes, his stories would sometime go on too long, but he could weave a tale that kept you at the edge of your seat, even when you were afraid he was getting perilously close to bad taste or a faux pas, then at the last moment he would pull back to what was his original, often brilliant point.

He was also anything but a trickster in terms of his personal relations. I don’t think there would have been anything he wouldn’t do for you if he could. He also never spoke badly of anyone, always looking with humor for what was good in a person, always supporting his colleagues, because, he said, there was room at the top for all of them.