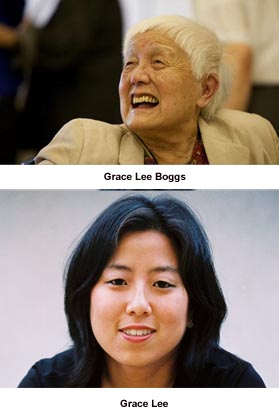 "American Revolutionary: The Evolution of Grace Boggs," a documentary written and directed by TFT alumna Grace Lee MFA '02, about a 96-year-old Chinese-American activist and philosopher, was recently selected by Film Independent for the 2nd annual edition of its Documentary Lab, an intensive, seven-week completion program for films in post-production.

"American Revolutionary" grew out of the Korean-American filmmaker's work on her 2005 award-winner "The Grace Lee Project," about the surprising prevalence in America of Asian women who shared her name. Bogg's story, according to the filmmaker's website, “embodies the major social movements of the last century. Born before women could vote, Boggs has built movements from within the African-American community for 70 years and remains a passionate writer and advocate for the rebirth of her adopted hometown” of Detroit.

TFT alumni Quyen Tran and Jerry A. Henry MFA '02 worked on the film as cinematographers.

Her TFT thesis film, "Barrier Device," starring Sandra Oh, won a Student Academy Award and a Directors Guild of America award, screened in dozens of festivals, aired on the Sundance Channel and is distributed by Shorts International.