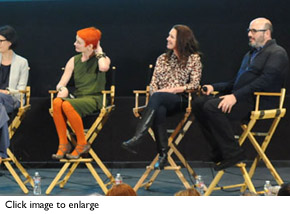 In February, the Academy Award© Costume Design nominees for 2012 joined fellow award-winning and distinguished Costume Design colleagues in the Bridges Theater for "Sketch to Screen: The 2012 TFT/Copley Oscar® Costume Design Celebration," an in-depth panel discussion of the pivotal role played by costume design in screen storytelling

"At a time when the global entertainment industry demands both classic and new forms of visual storytelling that enlighten, engage and inspire audiences worldwide," said Dean Schwartz, "unique events such as our annual Sketch to Screen, created as a close-knit partnership between innovators from TFT, the Copley Center and Swarovski®, advances our mutual goal of developing and showcasing outstanding, diverse new creative leaders who will shape the entertainment and performing arts landscape in exciting and imaginative ways for many years to come."

The 2012 Costume Design Oscar® nominees were Mark Bridges, who won the award a few days later for his work on "The Artist; Lisy Christl, "Anonymous," and Sandy Powell, "Hugo." Additional costume designers were Leesa Evans, "Bridesmaids;" Wendy Chuck, "The Descendants;" and Deborah Scott, "Transformers" and "We Bought a Zoo."

"Sketch to Screen" was presented by Dean Teri Schwartz, the David C. Copley Center for the Study of Costume Design and the UCLA School of Theater, Film and Television, with the generous support of Swarovski&copt