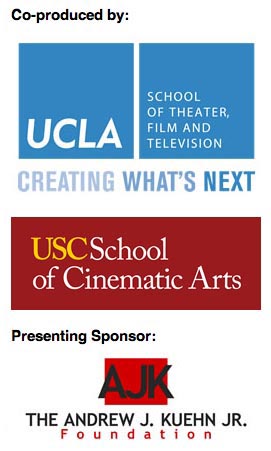 UCLA School of Theater, Film, and Television and

Transmedia, Hollywood is a one-day public symposium exploring the role of transmedia franchises in today's entertainment industries. Transmedia, Hollywood turns the spotlight on media creators, producers and executives and places them in critical dialogue with top researchers from across a wide spectrum of film, media and cultural studies to provide an interdisciplinary summit for the free interchange of insights about how transmedia works and what it means. Transmedia, Hollywood is co-hosted by Denise Mann and Henry Jenkins, from UCLA and USC, two of the most prominent film schools and media research centers in the nation.

As transmedia models become more central to the ways that the entertainment industry operates, the result has been some dramatic shifts within production culture, shifts in the ways labor gets organized, in how productions get financed and distributed, in the relations between media industries, and in the locations from which creative decisions are being made. This year's "Transmedia, Hollywood" examines the ways that transmedia approaches are forcing the media industry to reconsider old production logics and practices, paving the way for new kinds of creative output. Our hope is to capture these transitions by bringing together established players from mainstream media industries and independent producers trying new routes to the market. We also hope to bring a global perspective to the conversation, looking closely at the ways transmedia operates in a range of different creative economies and how these different imperatives result in different understandings of what transmedia can contribute to the storytelling process - for traditional Hollywood, the global media industries, and for all the independent media-makers who are taking up the challenge to reinvent traditional media-making for a "connected" audience of collaborators.

Many of Hollywood's entrenched business and creative practices remain deeply mired in the past, weighed down by rigid hierarchies, interlocking bureaucracies, and institutionalized gatekeepers (e.g. the corporate executives, agents, managers, and lawyers). In this volatile moment of crisis and opportunity, as Hollywood shifts from an analog to a digital industry, one which embraces collaboration, collectivity, and compelling uses of social media, a number of powerful independent voices have emerged. These include high-profile transmedia production companies such as Jeff Gomez's Starlight Runner Entertainment as well as less well-funded and well-staffed solo artists who are coming together virtually from various locations across the globe. What these top-down and bottom-up developments have in common is a desire to buck tradition and to help invent the future of entertainment. One of the issues we hope to address today is the social, cultural, and industrial impact of these new forms of international collaboration and mixtures of old and new work cultures.

Another topic is the future of independent film. Will creative commons replace copyright? Will crowdsourcing replace the antiquated foreign sales model? Will the guilds be able to protect the rights of digital laborers who work for peanuts? What about audiences who work for free? Given that most people today spend the bulk of their leisure time online, why aren't independent artists going online and connecting with their community before committing their hard-earned dollars on a speculative project designed for the smallest group of people imaginable - those that frequent art-house theaters?

Fearing obsolescence in the near future, many of Hollywood's traditional studios and networks are looking increasingly to outsiders - often from Silicon Valley or Madison Avenue - to teach these old dogs some new tricks. Many current studio and network executives are overseeing in-house agencies, whose names - Sony Interactive Imageworks, NBC Digital, and Disney Interactive Media Group - are meant to describe their cutting-edge activities and differentiate themselves from Hollywood's old guard. Creating media in the digital age is "nice work if you can get it," according to labor scholar Andrew Ross in a recent book of the same name. Frequently situated in park-like "campuses," many of these new, experimental companies and divisions are hiring large numbers of next generation workers, offering them attractive amenities ranging from coffee bars to well-prepared organic food to basketball courts. However, even though these perks help to humanize the workplace, several labor scholars (e.g. Andrew Ross, Mark Deuze, Rosalind Gill) see them as glittering distractions, obscuring a looming problem on the horizon - a new workforce of "temps, freelancers, adjuncts, and migrants."

While the analog model still dominates in Hollywood, the digital hand-writing is on the wall; therefore, the labor guilds, lawyers, and agent/managers must intervene to find ways to restore the eroding power/leverage of creators. In addition, shouldn't the guilds be mindful of the new generation of digital laborers working inside these in-house agencies? What about the creative talent that emerges from Madison Avenue ad agencies like Goodby, Silverstein & Partners, makers of the Asylum 626 first-person horror experience for Doritos; or Grey's Advertising, makers of the Behind the Still collective campaign for Canon? Google has not only put the networks' 30-second ad to shame using Adword, but its Creative Labs has taken marketing to new aesthetic heights with its breathtaking Johnny Cash [collective] Project. Furthermore, Google's evocative Parisian Love campaign reminds us just how intimately intertwined our real and virtual lives have become.

Shouldn't Hollywood take note that many of its most powerful writers, directors, and producers are starting to embrace transmedia in direct and meaningful ways by inviting artists from the worlds of comic books, gaming, and web design to collaborate? These collaborations enhance the storytelling and aesthetic worlds tenfold, enriching "worlds" as diverse as "The Dark Knight," "The Avengers," and cable's "The Walking Dead." Hopefully, this conference will leave all of us with a broader understanding of what it means to be a media maker today - by revealing new and expansive ways for artists to collaborate with Hollywood media managers, audiences, advertisers, members of the tech culture, and with one another.