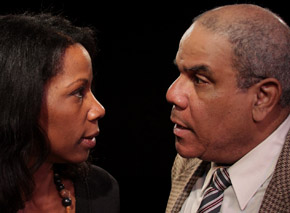 Posted on March 21st 2012 in Announcement

Set in a university town, the politics of academia weave through the play’s narrative as egos collide, relationships buckle, and the content of character is put to the test. Broadway actor Philip Casnoff (“Chicago”) stars as Simon Case, a white sociology professor who has married his much younger African American graduate student, Lashawna (OBIE award-winning actress Tracey A. Leigh). Perkins is her ne’er do well brother, who’s come to live with them, while Carlos Carrasco and Moreland round out the ensemble as African American professors Augustus and Janine Fryer.

“I’ve always been fascinated by how people discuss race in America,” explains actor-turned playwright Dolan. “It’s the defining social issue in our history. I’ve seen many plays that address it, but I’ve always been left profoundly dissatisfied because they almost universally pander to the expectations of liberal theatergoing audiences. I wanted to write a play that is not necessarily a reflection of the liberal perspective, and I wanted to write it without apology.” 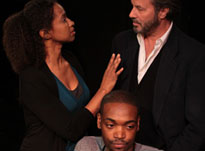 Menzies first directed a reading of The Many Mistresses of Martin Luther King for EST/LA’s Festivity/LA new play festival, followed by a workshop production at the Berkshire Playwrights Lab. “Andrew treads very bravely into extremely risky thematic material,” he notes. “But what attracted me to the project is the quality of the writing. It’s a solid family drama with great parts – a true ensemble piece for actors. I could tell right away that this was a playwright who has acted – the scenes are well-structured, the characters beautifully drawn, and the dialogue is electric.”

Ensemble Studio Theatre/LA is one of Los Angeles’ premier developmental and producing theaters, an offshoot of the renowned New York company that developed many of the most accomplished voices in the American theater, including Christopher Durang, Richard Greenberg, David Mamet, Marsha Norman, John Patrick Shanley and Wendy Wasserstein. Last year, under the leadership of artistic director Gates McFadden, EST/LA spearheaded the development of a multi-stage performance space at Atwater Village Theatre. The company kicked off its residency in 2011 with three critically acclaimed mainstage plays and one late-night offering, of which all four were named to “Best of 2011” lists.

“The Many Mistresses of Martin Luther King” plays Fridays and Saturdays at 8 pm and Sundays at 2 pm and 7pm, through April 29 (dark April 7 and no 2 pm performance on April 8). General admission is $25; pay-what-you-can at 2 pm matinee performances on March 25 and April 1, 8 and 15 (subject to availability). Ensemble Studio Theatre/LA is located in the Atwater Village Theatre complex at 3269 Casitas Ave in Los Angeles, CA 90039. On-site parking is free. For reservations and information, call 323-644-1929 or visit www.ensemblestudiotheatrela.org.