Harry Stein, the pot-smoking amateur detective, is back and generating buzz... 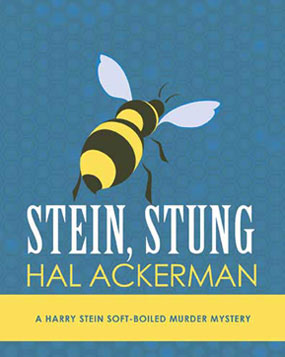 Last time, it was stolen weed and knockoff designer shampoo. This time, it’s the seemingly trivial occurrence of a few pilfered honeybee colonies that propels former hippie and merry prankster Stein into the multitrillion-dollar world of the honey industry.

In the presence of 6 trillion bees to pollinate millions of acres of almond trees, Stein, who is deathly allergic to bee stings, discovers the natural catastrophe of colony collapse, and a corrupt grab by organized AGROBIZ for all of the available water in Southern California.

In his absence, Stein’s daughter Angie and his woman-friend Lila’s very attractive 17-year old stepson find an elephant tusk that has been carried into Lila’s pool on an underground seepage from the nearby La Brea Tar Pits. When the rest of the skeleton emerges, it turns out not to be the prehistoric mammoth they’d hoped it would be, but a human being who just might have been murdered in the 1920s. The perpetrator of the 80-year-old murder is still alive and the most powerful man in Los Angeles and will do anything to keep the secret hidden.