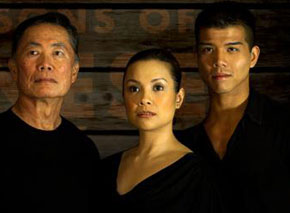 Posted on March 19th 2012 in Announcement

One of TFT's most popular alumni, "Star Trek" space-navigator George Takei '60, MA '64 is also known for his activism in the areas of gay rights and gay marriage.

Recently he took up another cause that's close to his heart, appearing on the website IndieGoGo.com to launch a Kickstarter-style crowd-sourcing campaign to fund a new Broadway bound musical, "Allegance," about the internment of Japanese Americans during World War II. The issue is autobiographical for Takei, who grew up in a camp in Arkansas.

When the fundraising campaign surged over the $150,000 mark recently, Takei made good on his pledge to fans that he would post a video of his legendary “happy dance” on the Internet.