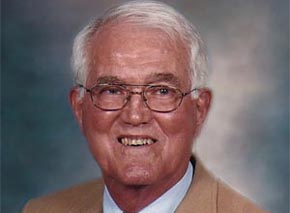 TFT professor Emeritus Donald B. Crabs, beloved long time teacher of theater scenic design at TFT, has passed away. He died on January 26, at Marina Del Rey Hospital, after a long illness. He is survived by his wife, Jane, and their three children.

"On behalf of our entire faculty, staff, student and alumni,” said Teri Schwartz, dean of the School, "our most heartfelt condolences go out to the entire Crabs family for their loss. The outpouring of love and beautiful thoughts about Don have been so moving and a true testament to his fine and inspirational spirit as an artist and teacher here at TFT. Clearly he had such a lasting and positive impact on so many faculty and students. He has left a special legacy at TFT for which his entire family should be so proud.”

Crabs was born in Puyallup, Washington, and studied scenery and lighting design at the University of Puget Sound and at Northwestern University. He taught at Rutgers from 1951 to 1965 and at UCLA from 1965 through 1991.

Crabs designed many productions in the Theater Department, including "No Place to Be Somebody," "The Physicists," "A Chorus Line," "Skin of Our Teeth," "Troilus and Cressida," "Sergeant Musgrave's Dance," "The Measures Taken," "Baal" and "Winterset."

In 1990, Crabs received a lecture and research grant for the UC Education Abroad Program in China.