From Cologne to South by Southwest 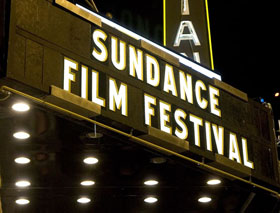 Writer-director Lucas Mireles, a UCLA TFT graduate student, and producer Ryan Slattery, who graduated from TFT last year, haven’t had much time to relax recently. They’ve been busy traveling to Cologne, Germany; showing their short film “Playtime” (Spielzeit) at the Sundance Film Festival in Park City, Utah, where it played in the Shorts Competition to standing ovations; and now are headed to Austin, Texas, to show the film at the South by Southwest Conferences and Festivals (SXSW).

Made during the summer of 2010, “Playtime” is part of an innovative collaboration spearheaded by Barbara Boyle, chair of TFT’s department of Film, Television and Digital Media, in which students from TFT and those from Internationale Filmschule Koeln (IFS), a privately funded film school based in Cologne, work together on various projects. Mireles and Slattery were among five students, including production/directing candidate Iliana Sosa and cinematography students Jeanne Tyson and Leigh Underwood, selected to take part in this new venture. “Playtime,” which follows the lives of several German youths on a Sunday afternoon, was one of four films that resulted from the collaboration.

When the TFT students left for IFS, they had little idea of how things would turn out. “It was a leap into the unknown,” Slattery recalls. They’d been told only that they would be making films inspired by the classic 1930 German silent feature “People on Sunday” (Menschen am Sonntag) but they couldn’t find a copy of the film to study before leaving for Europe. Their initial anxiety was soon replaced by exhilaration.

“The first time they screened ‘People on Sunday’ for us in Germany was intoxicating,” Mireles recalls. “The people who made it are now major names in film history: Billy Wilder, who was one of the writers; Curt Siodmak, Fred Zinneman — gifted people who later emigrated to the U.S. when the Nazis took over. But at the time they made this film, they were a bunch of twentysomethings, just like us, and the film was made in an experimental, loose way, with a crew of eight and no professional actors, so a lot of it feels like a documentary. The people from IFS told us, ‘This is what we want to do and this is what we have the budget for.’”

Mireles wrote the “Playtime” script in English and had it translated for the German cast and crew, a group of 20, including three well-established working actors and Jens Nolte, an award-winning director of photography. With their help, Mireles and Slattery managed to shoot the 13-minute film in just four days.

“We wanted to do something in Cologne similar to what ‘People on Sunday’ did in Berlin,” Mireles says of their film’s loose, companionable style. “They showed everything that was happening around the action. They showed people making out in a forest, and then the camera would pan to the left to show that the lovers were near a dumpsite. In our first shot, it’s a man sitting on some stone stairs in a park, and it all looks green and beautiful, but change angles and you can see that in the background behind him, there’s a nuclear plant.”

“For me,” Slattery says, “the movie is about all of the seemingly unimportant things in life that are absolutely wonderful. The simple moments. For me that’s ‘Playtime.’”

“Ryan coined the expression ‘point of view relay’ to describe the structure of it, which is perfect,” Mireles says. “We start off with one character, and he meets two others, and that situation gets awkward and one of them leaves, and a group of kids comes into it at the end. It’s life unfolding. If I were going to describe ‘Playtime,’ I would say it’s like recess, which was on of my favorite things growing up. That’s what I feel like when I’m watching it.”

The filmmakers are grateful that Sundance programmers chose “Playtime.” The odds were long, to say the least.

“For our category alone, Sundance had over 7,600 submissions,” Slattery says, from which only 64 films were selected. Ours was one of the 64.”

The festival was a revelation for the first-time attendees, not only because of its festive atmosphere but because of the reaction their film received when shown to passionate film lovers in sold-out screenings.

“It was so vindicating to finally see it with an audience,” Mireles says. “The film played four times in Park City, and for me, sitting there, hearing people laugh, it was like, ‘Everybody likes it!’ You shed a tear or two when you see your film at Park City. Every moment feels really good.” (It’s been a really good year for Mireles, too. In addition to the success of “Playtime,” his short film “Hijo de mi Madre” (“A Mother’s Son”) screened at Park City’s other festival, Slamdance, while his short, “Love Analysis,” went to last year’s SXSW.)

The trip to Sundance included a reunion of sorts with their German collaborators Christopher Becker, one of the film’s producers, and photographer Paul Pieck, who flew in for the occasion. To cap it all off, at Sundance’s exclusive annual Director’s Lunch, Mireles had a brief but close encounter with screen icon and festival founder Robert Redford.

“I used my moments with him to talk about an amazing environmental documentary I had seen in Austin that he executive produced, ‘The Unforeseen.’ It’s about the unexpected impacts of a development on a beautiful natural feature in the area, Barton Springs Pool, a swimming hole that’s fed by a spring. He said, ‘Did you know I learned to swim there when I was 6?’ It was great to have that kind of a personal encounter with a man of his stature,” Mireles says. “He’ll never remember it, but I always will.”