Professor Emeritus; former Dean of the UCLA School of Theater, Film and Television 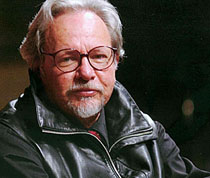 Educator, critic, preservationist and former dean of the UCLA School of Theater, Film and Television, Robert Rosen has spoken at scholarly, public, and professional meetings in more than twenty nations on subjects related to film criticism, media history, and curatorship. He has published widely in the field of media preservation and has guided the growth of the UCLA Film & Television Archive from a small study collection to the world’s largest university-based holding of original film and television materials.

As a preservationist and historian, he has occupied many positions of leadership in the field. These include: Founding Director of the National Center for Film and Video Preservation at the American Film Institute, the Executive Committee of the International Federation of Film Archives, member of the National Film Preservation Board of the Library of Congress, and Board Member of the Stanford Theater Foundation and the Geffen Playhouse. With Martin Scorsese he was the organizer of the Film foundation on which he currently serves as the founding Chair of the Archivists Council. Rosen was decorated by the French Government as an Officer of Arts and Letters and was awarded the International Documentary Association’s Career Achievement Award for Scholarship and Preservation. For ten years he was the film critic for KCRW National Public Radio and he is an active member of the Los Angeles Film Critics Association. He stepped down as dean of the School in July 2009.