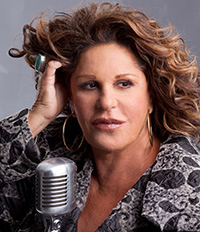 Lainie Kazan is a visiting associate professor at the UCLA School of Theater, Film and Television. She is the embodiment of the word entertainer — an artist who has reached the pinnacle in virtually every area of performance. She has come a long way since she was Barbra Streisand’s Broadway understudy in Funny Girl. Once she was able to display her talent in two shows, she became the chanteuse of her native New York, with nightclub stints and guest appearances on virtually every top variety and talk show in network television, including an unparalleled 26 appearances on The Dean Martin Show. She even hosted her own variety special for NBC, and at the Playboy Clubs in Los Angeles and New York, opened the popular Lainie's Room and Lainie's Room East, respectively.

The sensual magnetism Kazan exuded in her variety shows and nightclub acts attracted film directors and producers, leading quickly to roles in both film and television. After watching her perform at San Francisco's Fairmont Hotel, filmmaker Francis Ford Coppola offered her a prominent role in One From the Heart (1982), which led to more acting opportunities. Her next role was in Richard Benjamin's My Favorite Year (1982), starring Peter O'Toole, for which she earned a Golden Globe nomination. Other films include Lust in the Dust (1985) with Tab Hunter and Divine; The Delta Force (1986) with Chuck Norris; Harry and the Hendersons (1987), directed by Steven Spielberg; Beaches (1988) opposite Bette Midler and Barbara Hershey; 29th Street (1991) with Danny Aiello; The Cemetery Club (1993); The Associate (1996) with Whoopi Goldberg; Love Is All There Is (1996) with Renee Taylor, Angelina Jolie and Paul Sorvino; The Big Hit (1998) with Mark Wahlberg; The Crew (2000), with Burt Reynolds, Richard Dreyfus and Jennifer Tilly; What's Cooking? (2000) with Mercedes Ruehl, Julianna Margulies, Kyra Sedgwick and Alfre Woodard; Gigli (2003) with Ben Affleck and Jennifer Lopez; Whiskey School (2005) with Olympia Dukakis, Mary Stuart Masterson and Gary Swanson; Bratz (2007); You Don’t Mess With the Zohan (2008), alongside Adam Sandler; and Beau Jest (2008), starring Seymour Cassell and Willie Garson.

Kazan’s other television credits include The Paper Chase, for which she received a Cable ACE Award nomination; and St. Elsewhere, for which she was Emmy Award nominated. She was featured on Fox's Beverly Hills, 90210 and had recurring roles as Aunt Frieda on CBS'The Nanny, and as Kirstie Alley's mother on NBC's Veronica's Closet. She guest starred on CBS’ Touched by an Angel and starred in the Wonderful World of Disney TV movie Safety Patrol, opposite Leslie Nielsen. She guest starred on Will & Grace and co-starred with Virginia Madsen in the Lifetime Original Movie Tempted. She starred in TNT’s The Engagement Ring with Patricia Heaton, Vincent Spano and Tony Lo Bianco, helmed by Emmy-nominated director Steven Schachter. Other credits include the webisode In the Motherhood, opposite Leah Remini; ’Til Death, starring alongside Joely Fisher and Brad Garrett; Ugly Betty, with Vanessa Williams, America Ferrera and Judith Light; Desperate Housewives; Modern Family and Grey’s Anatomy.

Kazan earned a Best Featured Actress Tony Award nomination for her reprised role in the Broadway musical version of My Favorite Year (1992-93). She also starred on Broadway in The Government Inspector (1994) with Tony Randall, the award-winning drama The Exonerated (2003), and The Vagina Monologues (2005). At the Brentwood Theatre in Los Angeles, she starred opposite Renee Taylor and Joseph Bologna in the Broadway comedy Bermuda Avenue Triangle (2006).

Kazan has performed to sold-out engagements at Los Angeles’ Cinegrill and Catalina Bar & Grill; Atlantic City’s Atlantic City Hilton, Harrah’s Casino and Resort and Trumps Castle; and New York City’s Feinstein’s at the Regency, Rainbow and Stars, Tavern on the Green and the famed Oak Room at the Algonquin Hotel. She has also performed with such symphonies as The Boston Pops, The Palm Beach Pops and The Cleveland Symphony, and has sung throughout the United States, Europe and Asia.

She released two albums, 1995’s Body and Soul, and 1998’s Lainie Kazan: In the Groove, which was produced by Kazan, David Benoit and Clark Germain.

Kazan has graced the stage for many AIDS benefits, telethons and non-profit organizations. She produced and performed in Doin’ What Comes Natrur’lly!, an all-star Broadway tribute to Ethel Merman to benefit Gay Men's Health Crisis that also featured Patti LuPone, Elaine Stritch, Andrea Martin, Madeline Kahn and Bette Midler. She serves on the Board for the Young Musicians Foundation, B'nai Brith and AIDS Project Los Angeles.

Kazan received her bachelor of arts degree in speech and drama with a minor in education from Hofstra University. She studied acting with Sanford Meisner at the Neighborhood Playhouse, voice with Joseph Scott, and acting with Lee Strasberg. She is a lifetime member of The Actor’s Studio.

Kazan has received a Woman of the Year award from B'nai Brith, was named the reigning 1997 "Queen of Brooklyn" at a ceremony hosted by Brooklyn Borough President Howard Golden, and in 1990, was presented with The Israeli Peace Award. She is a past vice president of The Muscular Dystrophy Association Board of Directors. She is also an adjunct professor at Hofstra’s School of Communications and sits on the advisory board. She previously sat on the boards of the Screen Actors Guild and The Young Musicians’ Society.