Payne and Verbinski are 2012 Oscar winners 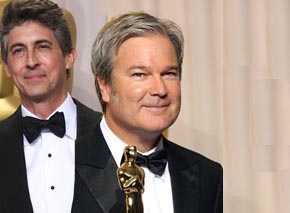 Posted on February 27th 2012 in Industry

Executive Board Member Verbinski accepted the Best Animated feature Oscar for “Rango,” his innovative first venture into the medium of animation after a highly successful career making live action blockbusters.

“This film,” Verbinski declared from the podium, “was made by a bunch of grownups acting like children.”

Payne was the director as well as the co-writer (with Nat Faxon & Jim Rash) of “The Descendants,” the film that won this year’s Best Adapted Screenplay trophy — Payne’s second after his 2005 win for “Sideways” in the same category.

Backstage at the event, Payne praised his co-writers: "They paved a path for me because they'd been through the book quite a few times. They gave me the luxury to pick and choose what I responded to.”

Nominated along with Payne and Verbinski was TFT Executive Board Member Frank Marshall ’68, the producer of Best Picture nominee “War Horse,” directed by Steven Spielberg.

Both "The Descendants" and "Rango" were heavily favored in their categories, in which they had won multiple precursor prizes and critics group awards.

"The Descendants" centers on a Hawaiian businessman (George Clooney) who tries to bond with his two daughters after his wife has a tragic boating accident and languishes on life-support.

“Rango” is a mock spaghetti western populated by a cast of goggle-eyed desert critters led by Johnny Depp, who voiced the title character, a chameleon suffering an identity crisis.