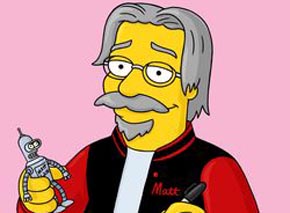 In January 2012, Matt Groening, the award-winning creator of Fox’s The Simpsons, pledged $500,000 to the UCLA School of Theater, Film and Television to create the Matt Groening Endowed Chair in Animation at UCLA TFT.

The endowment enables the animation program to bring master artists and working professionals with wide-ranging expertise to work with UCLA TFT students, some of whom would not normally be available in the animation curriculum.

“Matt Groening is recognized globally as a preeminent and pioneering animator, storyteller, cartoonist, writer and producer, said former Dean Teri Schwartz at the time of the bestowal. "His groundbreaking animated series have changed the landscape of television and have become a gold standard for animation and great storytelling throughout the entertainment industry.

“We are so inspired by Matt’s vision, and truly honored by his remarkable generosity and support of our Animation Program,” she continued. “Our UCLA TFT animation program is known for its exceptional and diverse talent from across the globe who create outstanding, award-winning innovative works year in and year out. With this amazing gift, Matt has given our students enormous support and ensured that we will be able to take our program to even greater levels of excellence. Our animation students will benefit greatly from this endowment and it will reinforce UCLA TFT’s continuing position as a premier professional school of entertainment and performing arts. Thank you, Matt Groening.”

The 30-year series reign of The Simpsons makes it the longest-running television comedy of all time. Groening’s creative talents have resulted in his receiving 34 Emmy nominations, 17 Emmy wins, the 2002 National Cartoonist Society Reuben Award and a 2004 British Comedy Award.

In 2007, Groening was ranked fourth (and highest American by birth) in Britain’s Daily Telegraph list of “Top 100 Living Geniuses.” In 2012, Groening received a star on the Hollywood Walk of Fame. His iconic brand of satire and social commentary is evident throughout dozens of Simpsons specials, spin-offs and feature films as well as the Fox series Futurama, numerous books, merchandising and more.