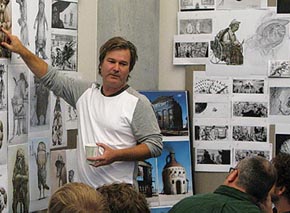 Posted on February 12th 2012 in Industry

UPDATE: The innovative animated western comedy "Rango," co-written and directed by TFT alumnus and Executive Board Member Gore Verbinski '87 ("Pirates of the Caribbean" 1- 3), was the top winner at the 2012 Annie Awards. According to the "Los Angeles Times:" "Rango," the Oscar-nominated box-office hit about a pet chameleon who becomes sheriff of a small western town, won the Annie Award for animated feature from the International Animated Film Society, ASIFA-Hollywood, on Saturday.

The film, directed by Gore Verbinski and starring Johnny Depp as the voice of Rango, also won Annie Awards for character design for Mark "Crash" McCreery, writing for John Logan, Verbinski and James Byrkit, and editing for Craig Wood.

A recent major article by Tim Appelo of "The Hollywood Reporter" revealed the meticulous process that could take live-action blockbuster director and TFT alumnus Gore Verbinski '87 ("Pirates of the Caribbean" 1- 3) to his first Oscar -- for the change-of-pace animated production "Rango." The mock Spaghetti Western, featuring a cast of desert fauna and the voice of Johnny Depp, has also been nominated for multiple Annie, BAFTA and PGA awards.

"Helping (Johhny) Depp to connect with his inner chameleon was the least of the risks Verbinski took to make this major departure in animated film. The daredevil director created "Rango" with Industrial Light & Magic, which handled the effects for the "Pirates" films but had never worked on a full animated feature before. ILM visual effects supervisor John Knoll was skeptical when Verbinski pitched the idea in August 2007, but he and ILM animation director Hal Hickel agreed to watch the first Rango story reel in 2008 to please their big client. "What intrigued me," says Knoll, "was when he said, 'There's Pixar and there's everybody who's imitating Pixar, doing me-too movies.' He didn't want to follow in their footsteps."

Conventional animation is, essentially, illustrations that move. "Rango's" roots are in live action. "We treated it like any of our previous live-action collaborations with Gore," says Knoll. Instead of reading lines to match animated characters, Depp and the cast were first filmed to give ILM animators reference points to inform the characters. "It's not just a drawing, it's a guy reacting as another guy gets thrown through the window," says Verbinski. The sensor motion-capture camera ILM developed in 2006 for "Avatar" enabled Verbinski to tour a virtual environment...and choose camera angles and change set elements. "He'd say, 'The clock tower is hidden, push that building back three feet and make the road six feet wider,'" says Knoll. "It played to his strengths with walking live-action sets."