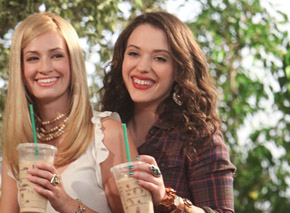 Posted on February 10th 2012 in Announcement

TFT acting alumna Beth Behrs '08 made her feature debut in 2009, only a year after graduation, in the straight-to-DVD sequel “American Pie Presents: The Book of Love.” Now she’s been cast as a heiress forced to work as a waitress in the CBS sitcom “2 Broke Girls,” co-starring with Kat Dennings in one of the upcoming TV season’s most anticipated new shows. (The program airs Mondays at 9:30 E/P.)

Behrs describes “Two Broke” in an interview with TVAddict.com:

I play Caroline Channing, a trust fund princess from the Upper East Side who loses everything when her crook-of-a-dad [Think: Bernie Madoff] ends up in jail. When they freeze all our assets and bolt up our townhouse, Caroline is forced to go to Brooklyn to get a job at a diner so that nobody from the Upper East Side will see her working. There, she meets Max (Played by Kat Dennings) who takes Carolyn under her wing. My character, who went to Harvard Business School, sees that Kat makes amazing cupcakes and decides that they should start a cupcake business together. Of course, in order to do that they have to make two hundred and fifty grand, which means they’ll have to work a bunch of odd jobs throughout the series to make the money that they need to start the business.

As a struggling actress, would it be safe to say that you’ve had more than your fair share of broke moments??

I was broke before I got the show! I was a nanny, I’ve worked at Chili’s, did tempt work. I was actually telling Michael and Whitney [Michael Patrick King and Whitney Cummings created the show] about the odd jobs I did so maybe they’ll incorporate some of that into the show. I think a lot of people in their early 20s coming out of college — even if you have a business degree from Harvard — a lot of people are having trouble getting jobs. So the show’s premise is really relatable right now. Especially for young people just growing up in the world.

A feature on the show in “Backstage” spotlighted the stars’ off-screen chemistry:

The gals who play the 2 broke girls are cracking each other up. As their interview takes place in late July, Beth Behrs and Kat Dennings can count a grand total of one week spent working together. That was when they filmed the pilot for “2 Broke Girls” — and that was in April.

But joining a reporter for breakfast at Mel’s Drive-in, a Valley landmark, they share laughs and a chemistry that seems years in the making — just as they do on their sassy new comedy as struggling waitresses at a Brooklyn greasy spoon. (“2 Broke Girls” premieres Monday at 9:30 p.m. EDT, before settling into its regular slot on Sept. 26 at 8:30 p.m., hammocked between the CBS hits “How I Met Your Mother” and “Two and a Half Men.”)

While waiting for production to resume in early August, they solidified their friendship.

Kat: “We’ve been checking in with each other every few days.”

Beth: “I’ll randomly text Kat about something I’m watching on TV in the middle of the night: ‘You need to see this! ‘ “

No actorly exchanges about process or technique?