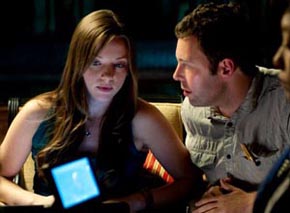 The pickup is a coup for Tim Shechmeister, a recent UCLA film school grad who directed the short and co-wrote it with his brother, Matt, as part of a thesis project. The Shechmeisters will co-write the feature and Tim would direct the big-screen version.

The roughly 11-minute short is set in the world of cyberbullying and eventually includes supernatural elements. In fact, the story could be described as being reminiscent of “The Grudge” or “The Ring,” but primed for the current generation that uses smart phones and Facebook as extensions of themselves.

The Grudge reference is apt because that [feature’s] writer, Stephen Susco, discovered the short at a screenwriting event this past summer. Tim Shechmeister, who is also a fan of Japanese horror (AKA J-Horror), gave Susco his business card with a link to the short, which the scribe checked out and loved.

"I see a lot of student films and like to see what's going on," says Susco. "I rarely see something as polished as this one."

Susco brought it to “Grudge” producer Roy Lee who, along with Lawrence Grey, took it to Screen Gems. The trio will now produce. John Middleton will exec produce.

“It strikes at the modern social media anxiety that really hits a hot nerve in this country,” says Susco. "How young people communicate is changing and technology is altering the tenor of that communication — in many cases for the worse. And this is an opportunity to do something scary and really potent at the same time."