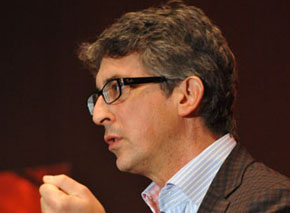 Posted on November 27th 2011 in Announcement

Screening of Alexander Payne's "The Descendants."

Oscar-winning TFT alumnus Alexander Payne MFA '90 placed his remarks off the record so that he could speak frankly, and "name names," as he put it, with his rapt audience of film and theater students at the Bridges Theater in November.

The occasion was an exclusive free screening of Payne's latest critically acclaimed work, "The Descendents," a typically wry and observant comedy-drama. George Clooney plays a middle-aged lawyer, from an established land-owning family in Hawaii, faced with wrenching domestic issues as his wife lies in a coma.

Dean Teri Schwartz introduced Payne as as an exemplar of TFT's central commitment to humanistic storytelling. And the students in the audience responded to the writer-director's forthrightness and wit by lining up to ask incisive questions.

"That's why I chose UCLA," one student declared afterward, as the discussion continued in the Bridges' lobby. "I want to make movies like that, movies about people."