Sloan, See and Wang in conversation with Professor Allyson Field 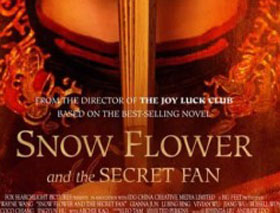 Posted on November 15th 2011 in Announcement

In early November, Dean Teri Schwartz invited all TFT students, faculty members and staff to meet a uniquely interesting group of filmmakers at a special screening of the work they created together, the Fox Searchlight release “Snow Flower and The Secret Fan.”

Dean Schwartz introduced the screening, and afterward the film's director Wayne Wang ("The Joy Luck Club"), one of its producers, Florence Sloan, and source-novelist Lisa See ("On Gold Mountain"), engaged in a spirited conversation, on stage of the Bridges Theater, with TFT Cinema & Media Studies Professor Allyson Nadia Field.

Set in 19th century China, the novel tells the story of two young girls in rural Hunan province, Lily and Snow Flower, who become a laotong pair (sworn sisters). They are subjected to the torment of foot binding and communicate using Nü Shu, historically a secret form of phonetic “women’s writing.”

Wang's film adds a modern story that runs parallel to the historical one, in which the descendants of Lily and Snow Flower must recover stories from their past, enriching their lives in a modern China that seems increasingly determined to obliterate its cultural legacy.

Dean Schwartz introduces the screening and her special guests: