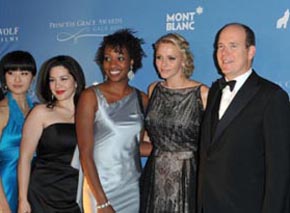 Posted on November 1st 2011 in Announcement

Hana Sooyeon Kim, a third year MFA candidate in Scenic Design at TFT, was the recipient of the Fabergé Award, a theater scholarship conferred during at the annual Princess Grace Awards Gala in New York on November 1.

Kim attended with other award winners as the guest of Prince Albert II of Monaco and his new bride, Princess Charlene, who were making their first public appearence together in the US.

A total of 21 awards were presented to emerging artists at the Cipriani 42nd Street restaurant in Manhattan. Actress Anne Hathaway introduced a special tribute to Julie Andrews, who received the Prince Rainier III Award sponsored by Montblanc.

The Princess Grace Foundation-USA, a public charity, was formed after the death of Princess Grace in 1982. They present scholarships, apprenticeships, and fellowships to assist artists at the start of their careers. The Foundation has cultivated a diverse group of nearly 600 artists to date who continue to advance the spectrum of performing arts with innovative, cutting-edge, and vibrant theater, dance, choreography, film, playwriting and design. Since the Foundation's inception, more than 700 Awards have been given to recipients, totaling more than $8.5 million.