Inspiration from Rich Rose, Barbara Boyle, Michael Hackett and the cast of "RENT" 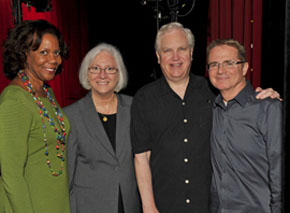 Bookended by electrifying production numbers from the 2011 Ray Bolger Musical Theater production of "RENT," this year's orientation program in the Freud Playhouse celebrated in the arrival on campus of the School’s new and returning students for the 2011-2012 academic year.

Attractions included a stirring statement of vision for the future from Dean Teri Schwartz, which offered an impressive list of scholarships and other initiatives that underscored her declaration of “The Year of the Student.”

In her Guest of Honor presenation, alumna Shirley Jo Finney MFA ’08, a world-famous actor and theater director put the credit for her wide-ranging career squarely on the interdisciplinary character of the TFT curriculum: She came to study acting, she said, and fell in love wih the other creative outlets being pursued under the same roof.

Schwartz organized her remarks around what she called “a key questtion: What world are we preparing our students for?”

Emphasizing the central themes animating her strategic plan for carrying the School forward into the 21st century, a vision that embraces humanistic storytelling, global diversity, cutting edge research and a radically interdisciplinary approach founded on a shared passion for the uplifting power of great storytelling.

“Serving as our anchor,” Schwartz said, “is great classical storytelling, the deep water that runs under everything we do at TFT.”

Watch a complete video of Dean Schwartz's address to the students: 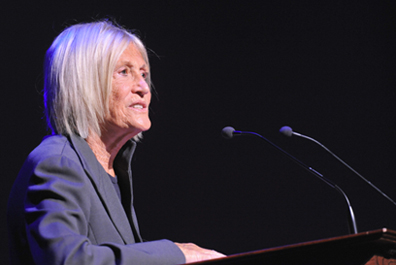 Theater Departmenr chair Michael Hackett introduced a stirring video documentary about the production of “Winnie,” a grand opera on the life of South African liberator Winnie Mandela, directed in Pretoria by this year’s Orientaion Guest of Honor Shirley Jo Finney. No stronger example could be presented or art that lives up to the dean’s call for works that “enlighten, engage and inspire change for a better world.”

Finney urged students to look for creative inspiration outside their comfort zones of specialization. “I don’t need to act to feel fulfilled,” she declared. “I have to create.”