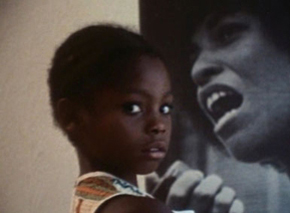 Posted on September 21st in Announcement

Beginning in the late 1960s, a number of promising African and African American students entered the UCLA School of Theater, Film and Television, recruited under a concerted initiative to be more responsive to various communities of color. From that first class through the late 1980s, and continuing well beyond their college days, these filmmakers came to represent the first sustained undertaking to forge an alternative Black Cinema practice in the United States. Along the way, they created fascinating, provocative and visionary films that have earned an impressive array of awards and accolades at festivals around the world, in addition to blazing new paths into the commercial market.

Occasionally called the “Los Angeles School of Black Filmmakers,” and perhaps more frequently "L.A. Rebellion," the group's significance is too far reaching to be fairly contained by any one name. In this exhibition, we proudly present more than fifty representative works that range from well-known films securely in the canon, to others seldom seen since school days. This series reveals a panoply of visions that do honor to individuals and the collective. Many films are presented here in new prints and restorations undertaken by UCLA Film & Television Archive.

The exhibition screens October 7 – December 17, 2011 at the UCLA Film & Television Archive's theatrical home, the Billy Wilder Theater in Westwood Village, CA. It will then tour internationally during 2012 and 2013.

"L.A. Rebellion: Creating a New Black Cinema" is part of Pacific Standard Time: Art in L.A. 1945-1980. This unprecedented collaboration, initiated by the Getty, brings together more than sixty cultural institutions from across Southern California for six months beginning October 2011 to tell the story of the birth of the L.A. art scene.