First group of TFT FilmLAB Fellows in partnership with Telluride 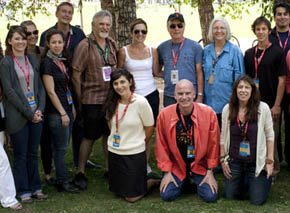 A multi-faceted educational partnership has been forged, by Dean Teri Schwartz, between the UCLA School of Theater, Film and Television and the Telluride Film Festival.

Famed film producer, TFT alumnus and Executive Board Member Frank Marshall '68 has generously pledged to fund for the next several years the first initiative under the partnership umbrella. This program is called Film LAB that brought ten of the School's outstanding graduate students – FilmLAB Fellows – to the world famous festival in the Colorado Rockies over the Labor Day weekend..

The second initiative launching this Fall as part of the new partnership is called For the Love of Movies" It will be centered around a curated film series for inner city high school students in Los Angeles. Based on the Telluride experience of seeing the very best of both local and global filmmaking, the series will focus on stories that resonate with the students’ lives.

“In creating this partnership between two of America's most respected institutions dedicated to the love and study of cinema,” said Dean Schwartz, “our intention is to build a series of joint educational programs that will benefit a diverse group of young filmmakers and cineastes. Our partnership is a unique, joint, educational, multi-program partnership to inspire the next generation of excellence in cinema and humanistic storytelling.”

In addition to the exciting array of international films screening at one of America’s best-curated festivals, FilmLab Fellows at Telluride participated in a series of workshops designed just for them, exclusive sessions with top directors, screenwriters, producers, agents and executives attending the festival. FilmLAB was a transformational experience that will have a profound effect on our Fellows’ future careers in the industry long into the future.

Collaboration was the subject of the “Albert Nobbs.” The fact-based story of a woman who successfully lived and worked as man in Victorian England was a fifteen-year labor of love for Close, who had played the role on stage. For FilmLAB Fellow Susana Casares '11, the story Close told of working on a personal passion project with a strong collaborator such as director Garcia was an object lesson in the interpersonal aspects of the filmmaking process, “...on how important it is to let go of something that you think of as yours, to let someone else make a contribution — and how crucial it is to find the right collaborators.”

This 38th edition of the Telluride Festival was a memorable one for the TFT community in other ways, as well. One of the most admired feature films screened this year, family drama “The Descendents,” starring George Clooney, was a new work written and directed by one of TFT's favorite sons, “Sideways” Oscar™-winner Alexander Payne MFA '90.

In addition, one of the FilmLAB Fellows, Julio Ramos, actually had a film screening at the Festival when he was in attendance. Ramos recognized alumnus Payne in the audience when his Spotlight-winning short, “Una Carrerita, Doctor” (“A Doctor’s Job”), about a physician forced to deal with the unexpected hazards of driving a cab, screened in the program "Student Prints," curated and introduced by admired filmmaker Godfrey Reggio (“Koyaanisqatsi”).

“My film was the first one to be screened," Ramos recalled, "and this great director gave it an amazing introduction it front of all these people whose work I admired. I didn't know how I could follow that.”

For film editor (“Twilight”) and TFT professor Nancy Richardson, who serves as faculty advisor to the FilmLAB initiative, “Telluride is a festival that is truly about the love of film, of historic films as well as excellent new ones. There is no film market; there are no paparazzi, no swag bags. It is really a perfect approach to influence young filmmakers, and a perfect fit with UCLA, with its emphasis on humanistic storytelling. What you see here again and again are films that tell truly human stories, that are about the real challenges we face as human beings. Here is where you can get a sense of the kind of films that are going to be made by our students in the future.”

This was the aspect of the Festival that exhilarated Samantha Sheppard a Ph.D candidate in Cinema & Media Studies, helping to restore her devotion to the art form she is studying.

“What everyone said about Telluride beforehand,” Sheppard said, “was that it was a festival that was all about the love of movies. And that was so true. Telluride reminded me that in addition to being a scholar I am a cinephile. The excitement of going into a dark theater, not knowing what you're going to get, seeing things you might never have heard of. Coming out and starting up a discussion with some random person about what you've seen. It was wonderful.”

Casares agreed that ease of access was a crucial aspect of the experience, “But equally important was the fact that we were invited here. Being around young filmmakers and filmmakers who have major careers, it really makes you feel that although you are just starting out, you are part of this. You belong here.”