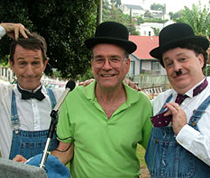 Vincent Brook is a scholar in American film and television, with a special emphasis on Jewish issues. He has authored or edited numerous books on the subject including Something Ain’t Kosher Here: The Rise of the "Jewish" Sitcom (2003), Driven to Darkness: Jewish Émigré Directors and the Rise of Film Noir (2009) and From Shtetl to Stardom: Jews and Hollywood (2017, co-editor). His other books include Land of Smoke and Mirrors: A Cultural History of Los Angeles (2013); two co-written histories of his hometown of Silver Lake: Silver Lake Chronicles (2015) and Silver Lake Bohemia (2016); and an e-book, Truth Be Told: A Comparative History of Documentary Film (2018), which he uses as a textbook in the documentary lecture course he has taught at UCLA TFT for several years. His latest, and most personal, literary effort is All About Eva: A Memoir of Holocaust Survivors, with a Hollywood Twist (2020). This tells the harrowing but uplifting story of his German-Jewish parents' experiences during the Nazi period, which they barely escaped, and their early years as struggling refugees in the United States.

Brook has been a lecturer at UCLA TFT since 2005, and has also taught at USC, Loyola Marymount University, California State University, Los Angeles and Los Angeles Pierce College. Prior to his teaching career, he was a film editor and screenwriter.

Brook received his Ph.D. in film and television from UCLA TFT.