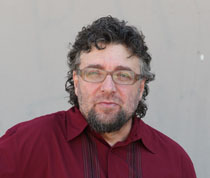 Fabian Wagmister is the founding director of the Center for Research in Engineering, Media and Performance (REMAP).