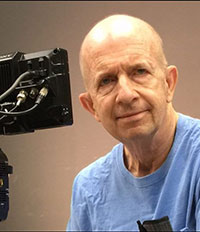 Director and cinematographer Deland Nuse is a lecturer in the Department of Film, Television and Digital Media specializing in cinematography (film/digital) and film aesthetics.

After completing his undergraduate and postgraduate work in the California State University system, Nuse did graduate work in experimental psychology (learning, cognition and perception) at the University of New Mexico, and for the next few years, worked in the mental health profession. However, a lifelong interest in film brought him to the graduate program in Cinema Studies at San Francisco State University where he completed his master of arts degree in film production in 1984. He shot several short films in the San Francisco area, including such documentaries as the award-winning The Other Bridge.

After moving to Los Angeles, Nuse worked as an electrician, best boy and gaffer to learn the lighting techniques for feature film production. In 1987, he was hired to shoot his first feature, Natural Instinct. The cinematography of that film garnered positive critical attention and led to work on seven other independent features. In 2006, he received the Triple Play Award for Cinematography for the film The Showdown, at the Long Island Film/Video Expo.