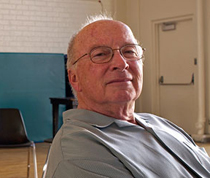 Mel Shapiro is professor emeritus at the UCLA School of Theater, Film and Television. During his tenure at UCLA TFT, he served as a distinguished professor of Theater. Prior to his time at UCLA TFT, he was one of the founders of NYU’s Theater Program (Tisch School) and was the head of Drama at Carnegie Mellon University. For the last several years, he has been an advisor for Kaiser Permanente’s Educational Theater program.

On Broadway, he directed the Tony Award and NY Drama Critics Award-winning musical Two Gentlemen of Verona, John Guare’s Bosoms and Neglect and Stop the World — I Want to Get off starring Sammy Davis, Jr. He directed the off-Broaday productions of Guare’s The House of Blue Leaves (named best American play by the NY Drama Critics), Vaclev Havel’s The Increased Difficulty of Concentration (Obie Award, best foreign play) and five productions for Joseph Papp’s New York Shakespeare Festival. He has also directed in London and in various regional theaters such as the Tyrone Guthrie in Minneapolis, the Arena Stage in Washington, D.C., Center Theatre Group Los Angeles, and the Stratford Festival in Ontario, Canada.

Shapiro has received Tony, Obie, New York Drama Critics, Drama Desk and Drama-Logue awards. He is the author of An Actor Performs and The Director's Companion.