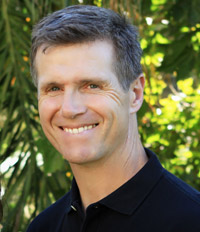 Ed Monaghan teaches stage combat in the Department of Theater. He is an expert martial artist, performer and fight choreographer who has trained and worked with such actors as Val Kilmer and Chris O’Donnell for Batman Forever, John Malkovich, Alicia Silverstone, Julianne Moore and Mira Sorvino, among others. Monaghan also specializes in sports performance conditioning, eastern philosophy and kinesthetic learning as applied to attentional states.

His instruction, based upon an in-depth analysis of different forms of combative movement, is designed to help the actor develop a sense of physical awareness that goes beyond absorbing the basics of stage combat. This training allows an actor to foster the mind-body connection and creates a broader pallet of physical choices from which the performer can choose. As a researcher, Monaghan studies the effects of movement-based awareness training on children and adults to improve their ability to focus and learn more effectively. This research field brings together the worlds of neuroscience, mindfulness, movement and creative arts.

As an actor, Monaghan has appeared in lead roles in several feature-length films, as a guest star in several TV series and held a lead role in a nighttime syndicated series that ran for two seasons. He has performed on stage in multiple theatrical venues.

Monaghan has studied a variety of martial arts for 40 years, holding a black belt or equivalent rank as well as instructor certification in Jeet Kune Do, Savate, Muay Thai, Kali, Jiu-Jitsu, Karate and Kung Fu. He has competed in numerous full-contact competitions, including full-contact karate, kickboxing, Savate, Muay Thai and “no rules” tournaments. Sifu Jerry Poteet, called “unquestionably the greatest Jeet Kune Do instructor in the world” by Inside Kung Fu magazine, and one of Bruce Lee’s original students, trained Monaghan in Jeet Kune Do. Monaghan also trained with Guru Dan Inosanto in Jeet Kune Do concepts, and studied with many great lamas, gurus and teachers of Eastern philosophy and religion.

He is a certified National Academy of Sports Medicine athletic trainer, Primal Move instructor and Functional Movement Systems specialist. In 2005, Men’s Journal magazine named Monaghan one of America’s Top 100 Trainers and one of the top five in Los Angeles.

In 2010, Monaghan was inducted into the USA Martial Arts Hall of Fame and voted Martial Arts Leader of the Year.