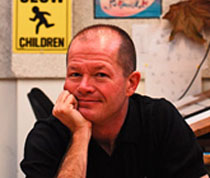 Chuck Sheetz is an Emmy Award-winning animation director on Fox Television's The Simpsons and has directed such classic episodes as “I am Furious Yellow,” “Any Given Sundance,” “Simpsoncalifragilisticexpiala(Annoyed Grunt)cious,” “Springfield Up,” "Eternal Moonshine of the Simpson Mind" (for which he won the Emmy in 2008) and "Gorgeous Grandpa." He produced and directed many episodes of the Disney Channel animated TV series Recess and directed Buena Vista Pictures' Recess: School's Out (2001). He has directed episodes of King of the Hill, The Critic, Drawn Together and What's New, Scooby-Doo?, which he produced for three seasons (2002-2005).

Sheetz is a 1983 graduate of the UCLA College of Fine Arts.