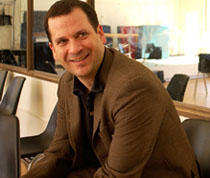 Chon A. Noriega has been a faculty member at UCLA TFT since 1992. His work explores Chicano/Latino arts and media through their aesthetic, social and institutional histories. In conjunction with his scholarship, he has actively archived the works and papers of individual filmmakers and artists, art groups, and community-based arts institutions, as well as curated or co-curated research-based exhibitions for which ARTnews identified him as one of six curators "shaping the way art is presented around the globe." Noriega has also been active in facilitating access for underrepresented groups working in media and the arts. He is co-founder of the National Association of Latino Independent Producers (NALIP, est. 1999) and in 2013 helped establish a national undergraduate mentorship program to diversify the curatorial ranks at six comprehensive art museums located in minority-majority cities. He has made presentations to the U.S. Commission on Civil Rights, the U.S. Congressional Hispanic Caucus and the U.S. Congressional Entertainment Caucus.

For the past 19 years, Noriega has directed the UCLA Chicano Studies Research Center. Under his leadership, the CSRC advanced multi-year research projects on archival preservation and access, arts and culture, economic security, educational access, immigration rights, public health, and urban poverty. He played a hands-on role in the CSRC developing the largest archival and library holdings in its field, publishing more than 32 scholarly books that have earned 63 international book awards, and organizing public programs and exhibitions reaching more than 800,000 people. The CSRC’s work has been recognized with diversity awards from the Society of American Archivists and the College Art Association. As CSRC director, Noriega established four endowed funds and has overseen the development of projects and programs in partnership with more than 150 community organizations, public institutions and universities/colleges.

He has a long record of academic leadership and service at UCLA, including on Graduate Council, Committee on Committees, Council of Faculty Chairs, and Council on Academic Personnel, where he will serve as Vice Chair in the 2021-22 academic year. In 2020, he received the Distinguished Leadership Award from the American Association of Hispanics in Higher Education, and the Distinguished Editor Award from the Council of Editors of Learned Journals. In 2021, the Society for Cinema and Media Studies recognized him as a "pioneer of film and media studies" through its online oral history project. His community service has been recognized by the National Hispanic Media Coalition and the Mexican American Legal Defense and Education Fund. He will be a Guggenheim Fellow in the 2021-22 academic year.

Noriega is a first-generation college graduate. He received his Ph.D. and M.A. from Stanford University, and B.A. from the University of Illinois at Chicago.