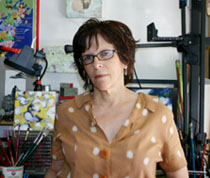 After receiving her M.F.A. from UCLA in 1990, artist and filmmaker Celia Mercer went to work in the interactive industry as an art director and interface designer. She returned to UCLA in 1996 and teaches traditional and digital animation at the School of Theater, Film and Television. She also works as an independent filmmaker.

As a filmmaker, Mercer animates the unexpected: rubbings of manhole covers; encaustic paintings; children’s paintings on fabric; garden plants; photograms; paint splattered and dripped through stencils; and scrapes and scratches on film stock. These animated films are experimental in nature — sometimes abstract, sometimes figurative. They are also surprisingly accessible. There’s a sense of a common factor between them, something that makes them a bit familiar. There’s the combination of a human touch with imagery that the viewer may sense they’ve seen someplace before, presented in an entirely new or unexpected way. Mercer’s award-winning animated films have been exhibited internationally and have competed in major film festivals.