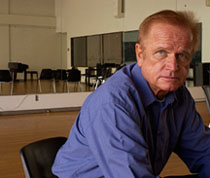 Bill Ward is president of Control Research & Engineering Corporation and has been chair of the UCLA TFT Department of Theater twice: from 1987 to 1993 and from 1998 to 2009. His research has led to the development of advanced high-technology systems for theater, film, television and opera. Projects include MiComm, SmartMotion, Light Pallet-90 and systems for rigging and the control of lighting, scenery and/or acoustics for the Brussels Royal Opera, the Seattle Opera, the National Theater of Venezuela in Caracas, the Orange County Center for the Performing Arts, the National Opera of Argentina in Buenos Aires, Teatro Colon de La Plata in Argentina, Teatro Maestranza, the Opera of Seville, Centro Cultural Belem and the San Carlos Opera in Lisbon. Additional commissioning institutions include the Bellagio, Luxor, Paris, Mandalay Bay, Mirage Hotel and Casino and the Venetian Hotel & Casino Theater in Las Vegas; Paramount Studios in Hollywood; three theaters at Disneyland Paris; Teatro Central for Expo ’92 in Seville, Spain; and Expo ’86 in Vancouver, British Columbia. His lighting systems have been selected for installation in more than 650 performing arts venues and are recognized as the world standard for lighting control in professional theater, television and opera. He has directed major research and development projects for Strand Lighting, Colortran, Protech Inc. and Hoffend & Sons.